Microtec is a manufacturer of Colony Picking Machine. 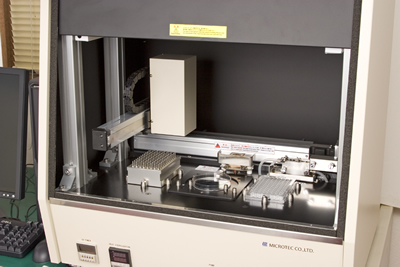 Isolation of E.coli or bacteria grown in dishes on agar medium

In the past bacteria isolation (colony picking) relied on manual work of the researchers. It has been feared that negative factors involved during this work like human induced contaminations and the unavoidable errors made by humans during work on microscopic scale had adverse effects on the quality of experimental data and researchers could not always be free themselves from such anxiety.

Researchers worldwide have been asking for automated "faster, reliable methods" with high throughput to match the developments since the human genome was completely decoded in the 1990s. The solution to these problems was a combination of robot controlled technology and image analysis (automatic colony picker), that had been developed in America and Europe.

Yet, the required extreme precision and highly complex mechanism have caused a disadvantage to these colony pickers. Even now at the dawn of the 21st century this has led to a situation where the extremely high costs are responsible for the fact that "only a very limited number of research facilities conducting large scale analyses and research" can afford to implement such equipment. Most researchers still have to rely on manual work.

To "provide the researchers of the world with a compact and low priced colony picker and thus contribute to research and development in the fields of biosciences," Microtec put its Colony Pickier Pm-1s on the market in 2003. Large numbers of Pm-1 and Pm-2 series are currently already used in Japan.